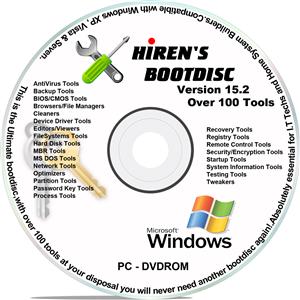 When it comes to having a certain PC streamlined, base lined, or simply reformatted, there are various ways to do so. Many resort to using the traditional clean install, where the primary driver is reformatted, thus leaving the PC clean and new, and the only thing that is very tedious to do afterwards are none other than installing once again the drivers or hardware installed on the computer, which usually take 2 or 3 hours to finish. What more if the computer is having a problem to boot or load the operating system?


What if the BIOS (Basic I/O or Input / Output System) becomes corrupt thus not able to access the operating system like Windows or Mac, and not being able to access the files? Well, there is a solution to this, and it’s another easy to use software: Hiren’s BootCD. Hiren’s BootCD is a boot disk utility that will help in resolving and making reformatting your computer easy. This kind of compilation software provides a compilation of programs to help resolves most and some uncommon Internet and computer issues like driver failure, intermittent internet connection and other computer malfunctions.


And Enjoy. For booting from USB, just follow the instructions below:

How to Boot HBCD (Hiren's Boot CD/DVD) from USB: 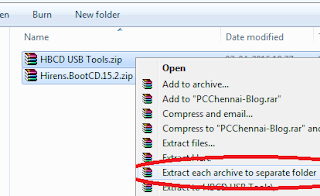 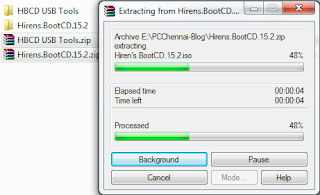 Step 2: Now, Go To, USB Tools Folder, and open "usb_format.exe" file as an administrator (elevation) as shown in the image.

Step 3: Now, select your Pen Drive from the drop down menu, select the file system as "fat32", then type a volume label for the pen drive (optional), then select "quick format" (else you will have to wait for a long time), then click start to format. 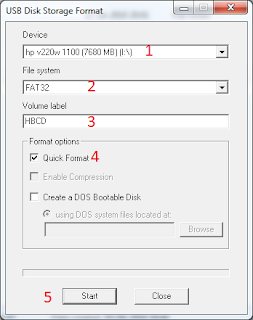 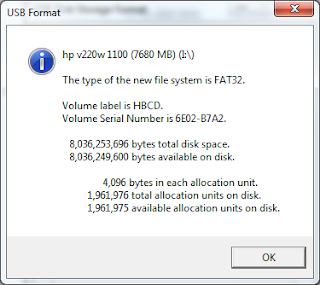 Step 4: Now Open "grubinst_gui.exe" as an administrator (elevation) as shown in the image. 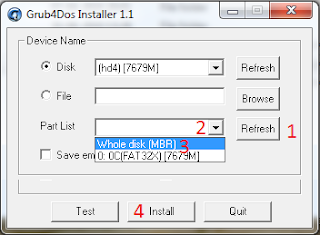 Now, select your Pen Drive on the Disk Section, then select "Whole Disk (MBR)" on the Part List Section, and click Install.

Then, you will receive a conformation like this as you have successfully installed grub bootloader on your pen drive. 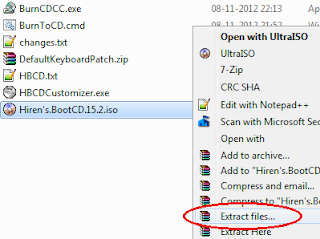 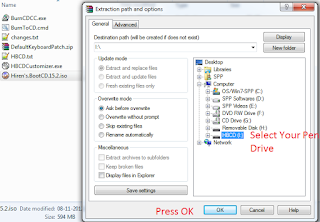 Step 6: After finishing extraction, go to your pen drive, open HBCD folder, copy the files "grldr" & "menu.lst" and paste them on the root of your pen drive as shown in the image...

Now you are done, reboot your PC, select the pen drive as your first boot device or temporary boot device. Enjoy...

It has the following Tools inside:


Partition means to divide a certain part of a hard drive for backup and system files, like separating a part from the whole. In most computers, the primary disk is C:, since it hold the operating system and program files. When a hard drive on the computer is partitioned, there are 2 independent drives, the primary for the OS, and the other for backup files. Since the 2 drives are independent, the drives work isolated and when becomes corrupt, the other is not affected. Partition Tools not only help in creating a new partition while there is still an open operating system, but it also helps manage and control the use of these partitioned drives. As a computer user, the person may opt to modify, resize the total capacity or delete any partitions made within the computer through the compiled list of programs which include Macrium Reflect, Partition Image and Partition Saving as one of the programs included. And that way, the creation of hard drive partitions without the need of installing an OS like Windows, Linux or Mac is lessened, which is the main goal of these computer programs, that is to add, modify or remove computer drive partitions without compromising the reinstallation of an Operating System.


Files maybe sometimes irretrievable due to being accidentally deleted or the file was not recognized by the computer system. Although the search feature in Windows may prove worthy, it sometimes leads to no files being found even though the file is available and still on the said hard drive. Another thing to note is the backup and recovery of the files from a computer. People may never know when disaster strikes and files have already been missing or deleted somehow without the user noticing. BootCD has a list of programs that can be used to backup, recover and retrieve files easily and with no hassle. Aside from backup and retrieve purposes, some files that are backed up can be also corrupted and certain programs can help in recovering and making the file corrupted accessible to use. Now, the main purpose of having programs loike this is to ease the burdens of backing, thoug it may be a good practice. Software like these include GetDataBack, HDD Scan and Recuva, from the makers of the CCleaner software, Piriform.


Most computers require an antivirus program. An antivirus program can be defined as a certain computer program designed to program and maintain the computer secure, meaning free of viruses and corrupt data. It also helps in maintaining computer performance in tip-top shape, so as to maintain the integrity of the hardware and system itself. Hiren’s BootCD has a number of free antivirus and can be used immediately. There are also a number of hard drive cleaners if ever there is a chance that the computer is already infected with malware, spyware, Trojan or any other virus. Aside from these purposes, some antivirus does not take much or hog the system resources and work in the background not unless the computer is idle for a time being, that way processes of other programs that take more power and resources can be given priority. Some programs included are Avira AntiVirus, SpyBot: Search & Destroy, and Malwarebytes Anti-Malware.


Maintaining a certain PC is a craft. It’s hard work in the process. The BootCD software has programs that can help in maintaining computer stability. It also has programs to check errors on the hardware installed. Aside from these, a certain program can estimate the life of hard disk or hardware installed. Aside from the fact that can estimate and test a computer for known and unusual hardware activity and hardware life, it also tests a certain computer component for any possible errors it can make which can render the PC unusable or corrupted. It can also monitor faults in RAM (Random Access Memory) or the memory for storing processes. Aside from RAM, it can also monitor possible faults in devices like the hard drive, CD Drive even the USB (Universal Serial Bus) ports. The variety of software that can be used can also monitor the physical aspect of the device or driver installed. It can give a report that a certain computer component has physical damage and the user has to check if it has an error in placement or the device is really defective.


Passwords are an important security feature in most systems. But as time passes by, a certain user may forget such passwords. The BootCD software contains programs like Autologon, WindowsGate, or Windows Key Finder help manage and remember passwords for forgetful PC users. Certain programs also provide password encryption and requirement for hard drive writing or removal of files or simply to secure the net as well.

A simple version of Windows XP is made as an option to be used in cases that require a separate or independent OS, like in a scenario that a certain computer has been filled with viruses. That way, another OS is working on the installed Operating System, and the user can use any available program to clean such viruses without having the need to reformat. 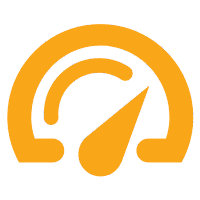 In this Topic, we are going to see what are the ways we can boost our system performance and what are the major causes of loosing performance in our windows computer. 1. Disk Defragmentation... (While using Hard Disk Drive, not for SSD) Disk defragmentation is the process of consolidating fragmented data on a volume (such as a hard disk or a storage device) so it will work more efficiently. Fragmentation happens to a volume over time as you save, change, or delete files. The changes that you save to a file are often stored in a different place on the volume than the original file. This doesn't change where the file appears in Windows—only where the bits of information that make up the file are stored on the actual volume. Over time, both the file and the volume itself become fragmented, and your computer slows down as it has to look in different places to open a single file. Disk Defragmenter is a tool that rearranges the data on your volume and reunites fragmented d
Keep reading 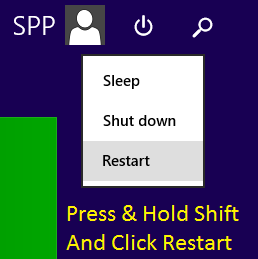 In this tutorial we are going to see the advanced reboot options including safe mode and disabling driver signature enforcement on Windows 8/8.1 & 10. To do this go to Start, Power and then Restart before clicking restart you have to press and hold shift.          If you do so you will get an advanced reboot menu which includes continue, troubleshoot, and turn off your PC. Select Troubleshoot,  Under troubleshoot you will have refresh your PC, reset your PC, and advanced options.         Refreshing and Resetting is for completely Re installing your operating system with and without deleting your personal data. If you're having problems with Windows 10 on your PC, you can try to refresh, reset, or restore it. Reset your PC prepares the PC for recycling or for transfer of ownership by reinstalling the OS, removing all user accounts and contents (e.g. data, Classic Windows applications, and Universal Windows apps), and restoring preinstalled cu
Keep reading 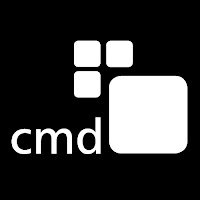 In this tutorial, we are going to learn some of the Run commands that we can use on Windows Computers to do some special tasks, here we have some of those useful commands with their work and descriptions listed here. This will be helpful for the learners and the people who are looking for a job in IT Industries. On the Microsoft Windows operating system, the Run command is used to directly open an application or document whose path is known. It functions more or less like a single-line command line interface. In the GNOME interface, the Run command is used to run applications via terminal commands. It can be accessed by pressing Alt+F2. KDE has similar functionality called KRunner. It is accessible via the same key binds. In the BASIC programming language, RUN is used to start program execution from direct mode, or to start a overlay program from a loader program. Sl. No. Area to Access… Run Command 1 Accessibility Controls access.cpl 2 Acces
Keep reading